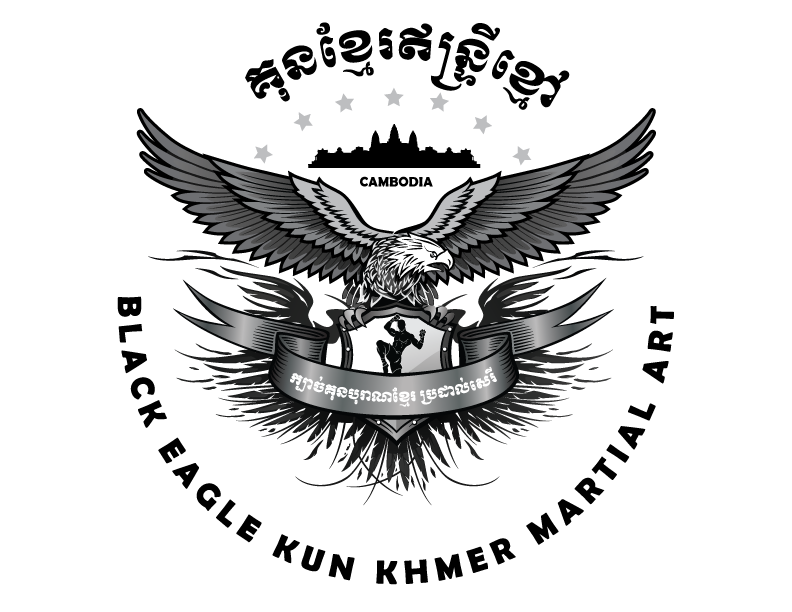 Kun Khmer, also known as Pradal Serey, is a traditional martial art and national sport of Cambodia. It is a form of kickboxing that incorporates punches, kicks, elbows, and knees, and is known for its emphasis on the use of strikes to the legs and low kicks. Kun Khmer also allows for the use of clinch techniques and throws.

Kun Khmer has a long history in Cambodia, with roots dating back to ancient times. It was traditionally used as a means of self-defense and as a way for young men to develop physical strength and skill. Today, Kun Khmer is widely practiced and is a popular spectator sport in Cambodia, with professional fights regularly held in stadiums and arenas.

Fighting has been a constant part of Southeast Asia since ancient times and eventually led to organized fighting forms. In the Angkor era, both armed and unarmed martial arts were practiced by the Khmers. Evidence shows that a style resembling Kun Khmer known as bokator existed in the 9th century, which may be one of the reasons why the Khmer empire was such a dominant force in Southeast Asia.[1] The kingdom of Angkor used an early form of Kun Khmer, named Yuthakun khmer khom, along with various weapons and war elephants to wage war against their main enemy, the Vietnam-based kingdom of Champa, and later, Siam.[2][3] Re-enactments of elephant battles are still recreated at the Surin Elephant Round-up.

At One time, the kingdom of Angkor dominated and controlled most of what is now Cambodia, Thailand, Vietnam and Laos. As a result, Cambodia has influenced much of Thai and Lao culture. This leads the Khmer to believe all Southeast Asian forms of kickboxing started with the early Mon-Khmer people; they maintain that Kun Khmer derived from bokator and went on to form the basis for Muay Thai. On top of oral stories from their ancestors, the basis of this argument are the bas-reliefs left behind by early Khmers in the ancient temples of the Bayon and other Angkor temples. Much of the writing on ancient Khmer art has either been destroyed or adopted by the invading Thai armies when the Siamese sacked and looted Angkor and took Khmer captives including members of the Khmer royal court back to Ayutthaya. The Khmer warrior-king Jayavarman VII and the founder of a unified Laos, Fa Ngum, were among the military leaders believed to have been trained in the old fighting styles of Cambodia.

During the colonial period, martial arts like kun Khmer (pradal serey)  were considered by the European colonists to be brutal and uncivilised. The French turned the art into a sport called (savate) by adding timed rounds, a boxing ring and western boxing gloves in an attempt to lessen injury. Originally matches were fought in dirt pits with limited rules while hands were wrapped in rope. Some matches had boxers wrap seashells around their knuckles to increase the damage that could be inflicted. In the 1960s, Cambodian boxing promoters held inter-martial art exhibitions.

Near death and revival of Kun Khmer

During the chaos of the Vietnam War, Cambodia was undergoing its own civil war. On April 17, 1975, the Maoist Communist rebels, the Khmer Rouge, overthrew the government of the Khmer Republic led by Lon Nol after America left the Vietnam War. The Khmer Rouge’s plan was to eliminate modern society and create an agricultural utopia. The Khmer Rouge executed educated people, others who had ties to the old government or anyone who was believed to be advantaged by the old society (doctors, teachers, soldiers, actors, singers, boxers, martial arts instructors etc.) and forced the remaining Khmer population into labor camps, in which many died of starvation and diseases, to be re-educated under the new government. Traditional martial arts were banned at this time and many boxers were executed or worked to death, which nearly caused the death of Kun Khmer. An estimated 1.7 million Cambodians or 21% of the population died during the Khmer Rouge regime according to the studies of the Cambodia Genocide Program of Yale University.

This lasted for four years until 1979 when the Vietnamese along with ex-Khmer Rouge officers, including prime minister Hun Sen, overthrew the Khmer Rouge. During the relative peace since the departure of the Vietnamese and the re-establishment of the Kingdom of Cambodia, the country’s traditional arts were revived, including Kun Khmer. 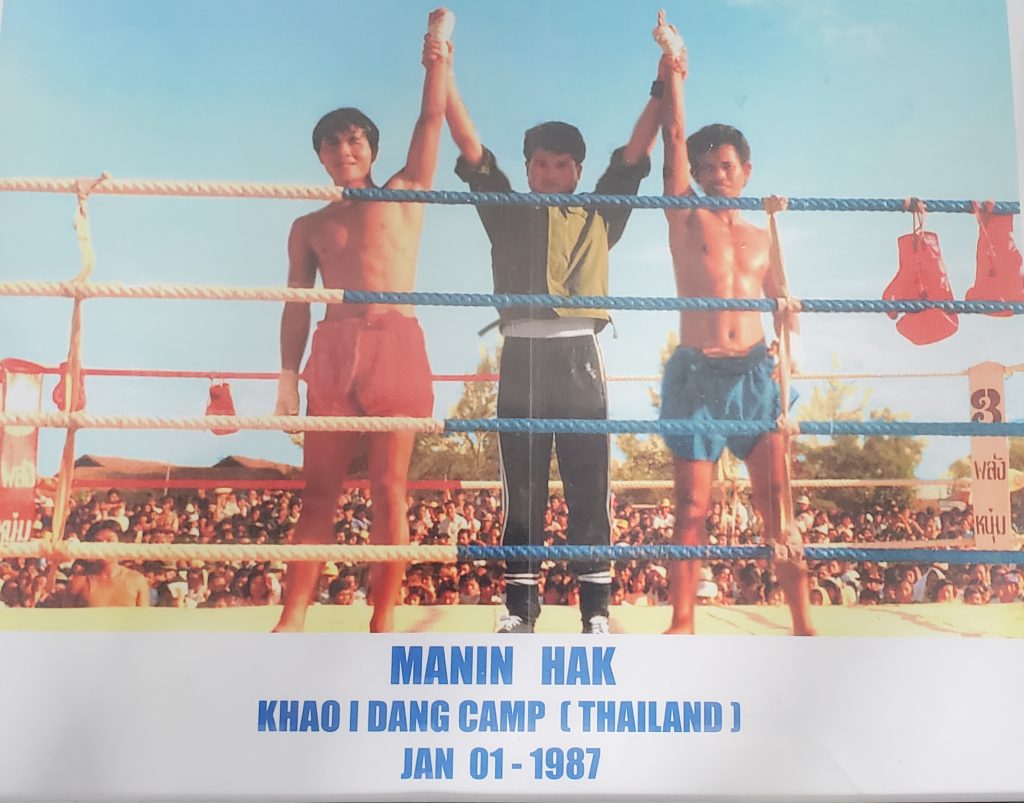 During and after this time of turmoil our Krou (Manin Hak) was fortunate to escape as a refugee and spent many years in a Thai refugee camp. In this period Krou Manin had many matches with Muay Thai opponents while in the refugee camps in Thailand as is seen in some of the photographs above. 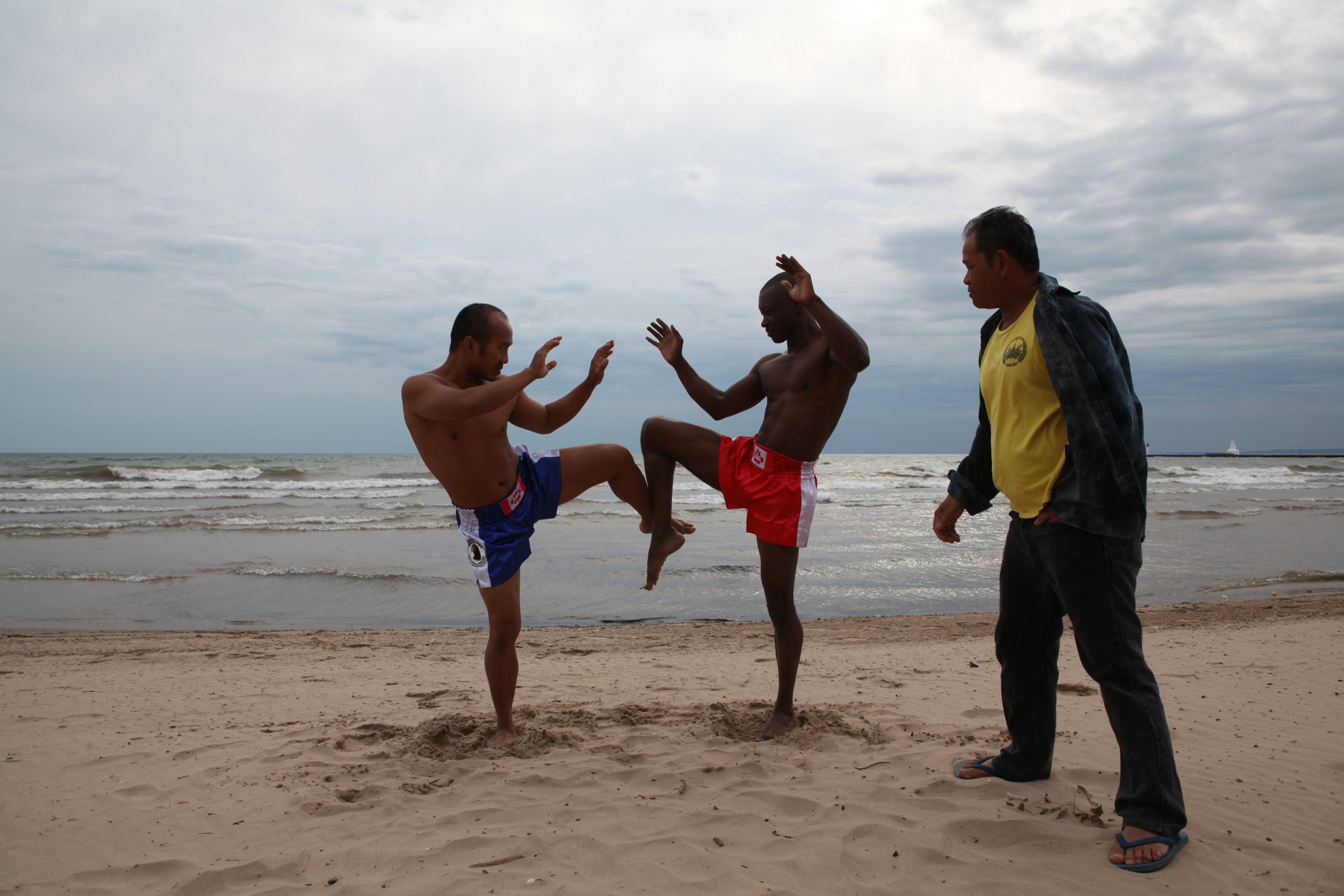 The rare and unique Style of Kun Khmer taught by (LAU KROU) Manin Hak is definitely a Cambodian heritage treasure that could have been lost.  Kru Manin now Resides in Hamilton Ontario Canada and has currently Passed on the full Knowlege of the art to two Student San Ses and Mark Simon  Over the last ten years students have participated in and Won Local and international Muay Thai and  Mixed Martial Arts matches with use of the art and its unique perspective. 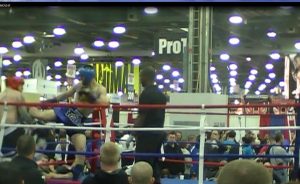 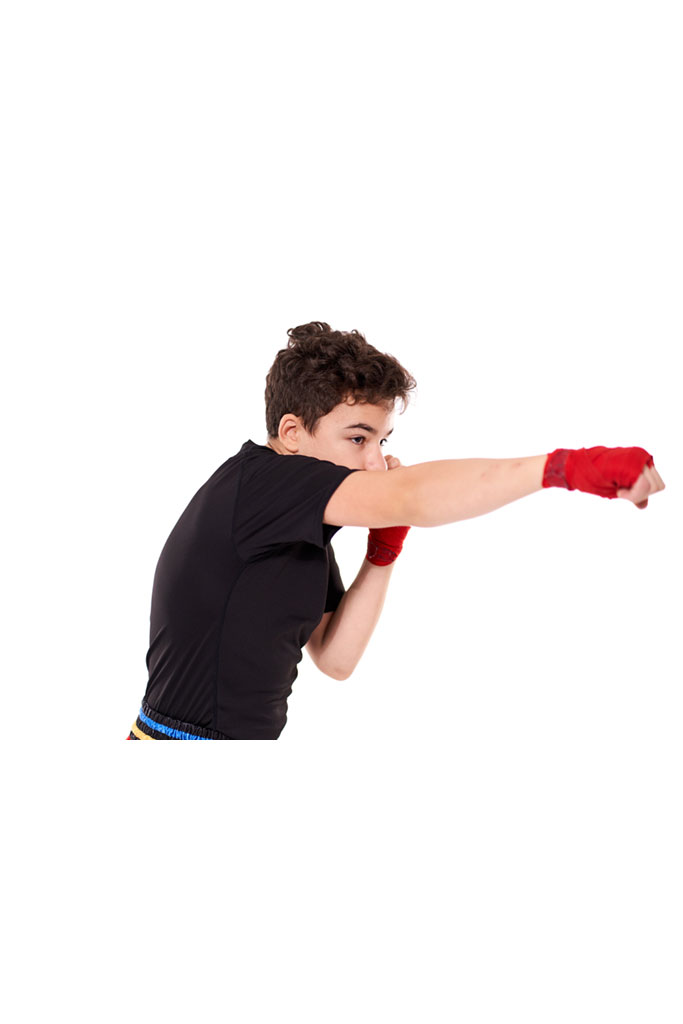